To promote the innovative new Colgate Optic White Express White toothpaste, Colgate-Palmolive put a YouTube video strategy at the core of its integrated media and creative campaigns. By overhauling its marketing strategy and investing more heavily in digital, Colgate scored big and "will never look back.”

As a 209-year-old company, Colgate-Palmolive is no stranger to successful multi-channel, big-budget ad campaigns. But in our rapidly changing world, Colgate realized that even time-tested strategies have room for improvement. When it was ready to launch a new breakthrough beauty product, Colgate Optic White Express White toothpaste, the team stopped to take a fresh look at the best options to reach their audience.

Getting attention in the always-on, media-saturated digital world is harder than ever. And to reach a broader (and younger) audience, Colgate Optic White realized it would need to rethink just about everything.

So Colgate, Red Fuse (Colgate’s integrated media and creative agency), and Google BrandLab came together to brainstorm and pave a digital way forward.

The integrated nature of Red Fuse facilitated an environment where the media, creative, and Google teams could work together from the beginning. As Steve Forcione, CEO of Red Fuse, explained, "Our creatives, media people, and strategists actually sit next to each other. They work in conjunction around a specific brand challenge instead of taking an assembly line approach. And in this case, Google was invited to be part of the team from the onset. We all worked together to come up with ideas."

Together at BrandLab, the group started by taking a hard look at their audiences: where they spend their time, the best ways to engage with them, and what human insights could drive compelling creative.

Based on learnings from the workshop and subsequent brainstorms with Google, Colgate Optic White did a complete 180, and instead of building a TV and print-based campaign and adding digital elements, it put digital at the core of its video strategy.

Philip Durocher, vice-president & general manager of Colgate Palmolive NA Oral Care, said, "In the past, we've tried to hit millennials over the head in TV and print. When we looked at reaching and connecting with them where they really are, YouTube was the logical place to go."

On YouTube, enthusiasts watch beauty video tutorials, seek out the latest trends in fashion, and engage in real conversations with YouTube creators. So Red Fuse took the lead on building a rich creative campaign centered on YouTube.

YouTube collaborations cut through the clutter both offline and online

Colgate Optic White knew that for a campaign to be truly integrated, it needed a hub. And that creative and media hub was YouTube. To get the most out of the platform and earn legitimacy and relevance with their audience—millennial beauty enthusiasts—Colgate teamed up with two rising YouTube influencers: Andrea Brooks and Blair Fowler.

Collaborating with YouTube creators can require a shift in thinking for brands. Forcione explained, "When we work with these stars, we recognize that we have to let them bring the idea and the brand to life in their voice so that it resonates with their audience. That's a big change for brands that are used to controlling every detail of the content."

So Colgate Optic White put its trust in Andrea and Blair, who created "The Smile Show," a series of videos featuring the product that have amassed 24M views and counting. Because the YouTube influencers know their audiences so well, they can produce content that is both relevant and useful to engaged consumers.

Audiences watched episodes of "The Smile Show" on desktop and mobile.

In an innovative move, Colgate carried this YouTube-driven creative over into traditional TV and print ads. Scott Campbell, general manager, Colgate Palmolive NA Integrated Marketing Communications, said identifying Blair and Andrea as beauty vloggers from YouTube was integral to the plan. "We wanted to connect the traditional with the digital in a meaningful way and let people know that we're turning to these influencers not just as spokespeople, but also just as triers and commentators on what this product can do for your smile."

Blair and Andrea's ease in front of the camera came through regardless of the medium. Campbell continued, "They had authentic excitement for the product. And that came across in the video, regardless of whether it was on TV, pre-roll, print, or on their own content channel."

Because the series was being created and produced as the campaign went along, Colgate had the unique opportunity to fine-tune messaging on the fly. Durocher shared, "We were able to reinforce different points along the way based on what consumers were responding to. We had more kicks at the can than we typically do with an advertising campaign where once it’s out the door you don’t really have a chance to change the messaging."

To ensure the creative had a broad millennial reach, the team put together an innovative, YouTube-led, integrated marketing plan. The campaign included traditional elements like print, in-store, and TV—and added more digital elements than ever before. The plan included the highest percentage spend on digital that Optic White had ever allotted. This increase represented both a leap of faith and a sound video strategy (given where consumers are spending their time).

Digital elements reached consumers on desktop and mobile devices, including the YouTube masthead, TrueView ads, Hangout on Air, GDN banners, and a YouTube channel gadget that housed "The Smile Show." Overlays were leveraged to drive viewers to watch additional episodes and to allow viewers to shop for the product right after they saw an ad or watched content.

The holistic plan allowed offline and online to work together seamlessly, with YouTube at the hub: 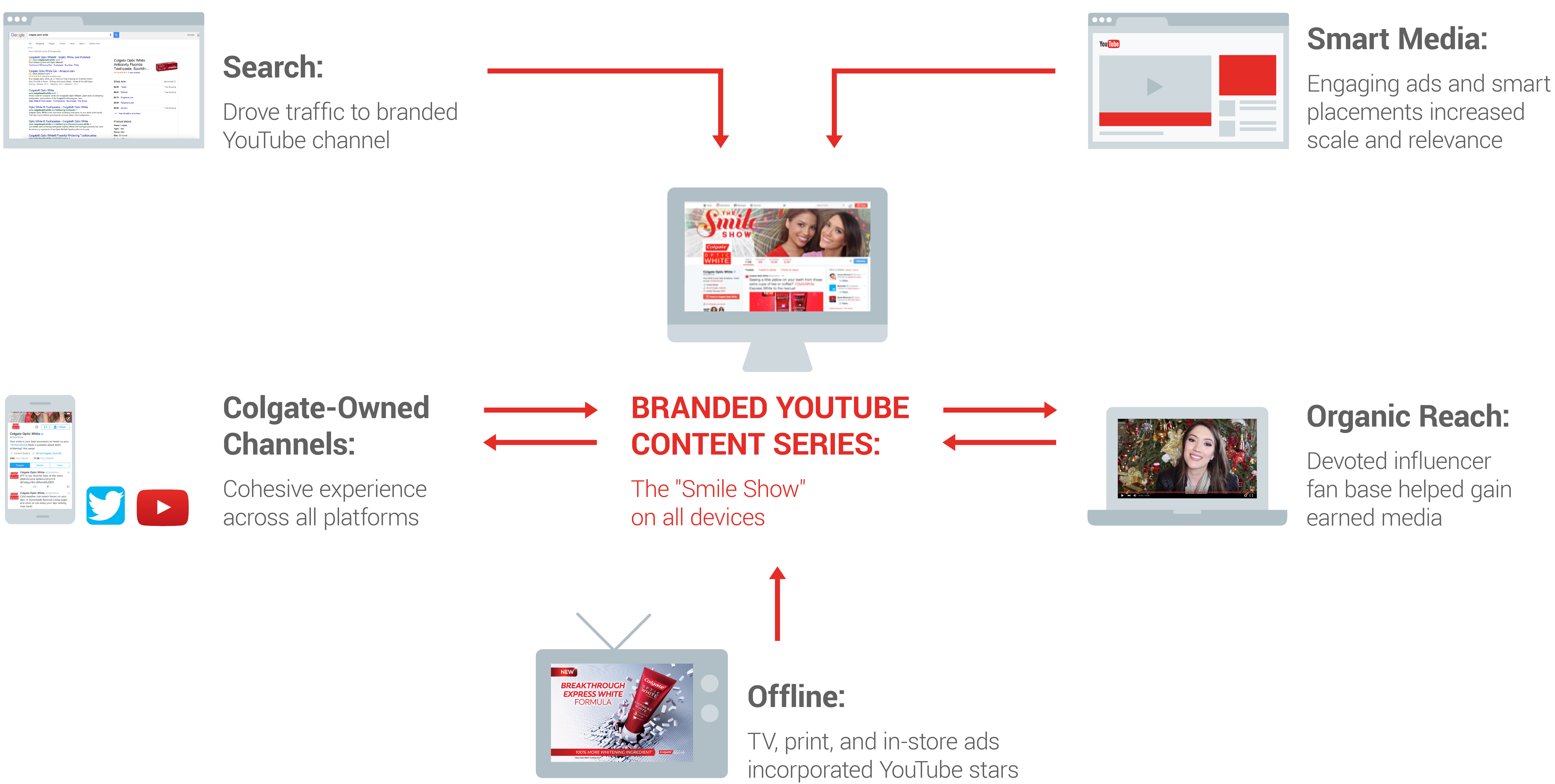 Colgate Optic White knew that reinventing its traditional approach was a gamble. Would the YouTube creators resonate with audiences on traditional media? Would fans of the YouTube celebs choose to watch branded content? Was the right video strategy in place to reach their intended audience at scale?

Quite simply, the bet paid off. And fast. Durocher and team couldn't believe how quickly the campaign took hold with audiences. "We had a terrific start, probably a faster start than any line extension we've ever had, and we think that's in part because we reached awareness levels that had never been reached in the first four weeks."

The numbers are staggering and far exceeded Colgate’s expectations. "The Smile Show" has generated 82 years of total watch time, with 24M total views. And the team credits the YouTube-driven creative and media campaign to increases in every key brand metric: a 13% lift in brand awareness, a 10.8% lift in purchase consideration, and an expectation-smashing 1116% lift in brand interest, which is 8X higher than U.S. CPG benchmarks.

Not surprisingly, Campbell said this new approach is the way forward for Colgate. "We'll never look back. The BrandLab and Red Fuse approach and the content framework that YouTube has given us is a great, simple way to organize and promote our content. In the future we are going to be looking at content and YouTube media as an incredibly important part of all our big campaigns."

With Red Fuse, Colgate Optic White is looking to continue moving dollars from traditional media to digital. And this campaign is driving change across the Colgate brand; its tactics and methods will be incorporated as new products are brought to market.

Durocher concludes, "I cannot imagine the company ever stepping back from where we got to this year; we will definitely be more and more into digital and especially digital video."